FAQs about Pomsky Vs Mini Aussie

Pomskies and mini Aussies are two of the most popular dog breeds around. But what are the main differences between these two dogs?

What are the main differences between pomsky and mini aussie dogs

When it comes to dogs, there are endless breeds to choose from. But if you’re looking for a smaller version of a popular breed, then you might want to consider a pomsky or mini aussie. Here, we take a look at the main differences between these two breeds to help you decide which one is right for you.

One of the most obvious differences between pomsky and mini aussie dogs is their size. Pomskies are a cross between a Pomeranian and a Husky, so they’re typically smaller than mini aussies. That said, their size can vary depending on which parent they take after more. Some pomskies may be closer in size to a miniature schnauzer, while others may be closer in size to a Shetland sheepdog.

Mini aussies, on the other hand, are simply miniature versions of the Australian shepherd. They usually weigh between 20 and 40 pounds and stand about 14 to 16 inches tall at the shoulder. So if you’re looking for a smaller dog, then a mini aussie is probably your best bet.

Another difference between these two breeds is their coat. Pomskies tend to have a thick, double coat that can be either straight or wavy. The outercoat is typically longer and harsher, while the undercoat is soft and dense. This coat is great for chilly weather, but it does require regular brushing to prevent mats and tangles.

When it comes to temperament, pomskies and mini aussies are actually quite similar. Both breeds are intelligent and eager to please, so they’re easy to train. They’re also both active breeds that need plenty of exercise. However, pomskies may be slightly more energetic than mini aussies due to their Husky heritage.

So, which breed is right for you? If you’re looking for a small dog with a thick coat, then a pomsky might be your best bet. But if you prefer a lower-maintenance coat and don’t mind sacrificing some size, then a mini aussie might be more your style.

Which breed is more intelligent 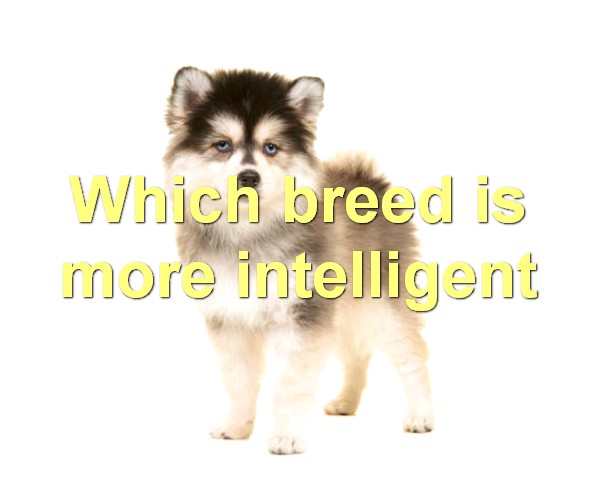 There are many different ways to measure intelligence in dogs, and no one breed can definitively be called the most intelligent. However, some breeds are considered more intelligent than others based on various criteria.

These breeds are all known for their obedience, trainability, and eagerness to please their owners. They are also popular choices for service and assistance work, such as guide dogs and therapy dogs.

So, which breed is the most intelligent? It depends on how you define intelligence and what you’re looking for in a dog. If you want a breed that is easy to train and will obey your commands, then one of the above-mentioned breeds may be a good choice for you. However, if you’re simply looking for a loyal and loving companion, then any breed can be the perfect fit.

Which breed is better at obedience training

Which breed is better with children

There are a lot of factors to consider when choosing a family pet. But if you have young children, the most important thing is to find a breed of dog that is good with kids.

Here are some of the best breeds for families with young children:

1. Labrador Retriever: Labradors are known for their friendly, outgoing personalities. They are patient and gentle, making them great playmates for kids. They also have a lot of energy, so they can keep up with even the most active child.

2. Golden Retriever: Like Labs, Golden Retrievers are also very friendly and good with kids. They are slightly less active than Labradors, but they still have plenty of energy for playing and exercising.

3. Beagle: Beagles are another breed that is known for being friendly and good with kids. They are also relatively low-maintenance, which can be a plus for busy families.

4. Pug: Pugs are small dogs with big personalities. They are loving and affectionate, and they love to play. Pugs do require some extra care because of their short noses, but they make great family pets.

5. Bulldog: Bulldogs may have a tough exterior, but they are actually very gentle and good-natured. They love to be around people, including kids, and they make great couch potatoes for lazy afternoons at home.

Which breed is better with other pets

There are a number of factors to consider when deciding whether a particular breed of dog is a good fit for your family and lifestyle. One important factor is whether the breed is compatible with other pets in the home. Some dogs do not do well with other animals, while others seem to get along with everyone. Here is a look at some of the most popular breeds of dogs and how they typically interact with other pets.

The Labrador Retriever is one of the most popular breeds of dogs in the United States. Labs are known for their friendly, outgoing personalities and their love of play. They generally get along well with other animals, including cats and dogs. Labs are also good choices for families with small children.

The Golden Retriever is another popular breed that is known for its friendly, outgoing personality. Golden Retrievers generally get along well with other animals, including cats and dogs. They are also good choices for families with small children.

The German Shepherd is a popular breed of dog that is known for its loyalty and protective nature. German Shepherds are often used as working dogs in law enforcement and the military. They are not always as friendly as some of the other breeds on this list, but they can be trained to get along with other animals if socialized from a young age.

The Beagle is a small breed of dog that is known for its playful, friendly personality. Beagles generally get along well with other animals, including cats and dogs. They are not always the easiest breed to train, but they make up for it in personality.

The Bulldog is a medium-sized breed of dog that is known for its calm, relaxed demeanor. Bulldogs generally get along well with other animals, including cats and dogs. They can be stubborn and difficult to train, but they make excellent companion animals.

Dogs have been bred for centuries to serve various purposes, from hunting and herding to guarding and companionship. While all dog breeds bark, some breeds are known for being particularly vocal, while others are more subdued in their barking. So, which breed barks less?

The answer may surprise you. While there are many quiet dog breeds, the breed that typically barks the least is actually the Basenji. The Basenji is a hunting dog from Africa that was originally bred to be silent, so that they could sneak up on their prey without giving away their position.

There are a variety of factors to consider when determining which breed of dog requires more exercise. Size, age, and health are all important considerations. Additionally, the level of activity required by each breed can vary significantly.

For example, toy breeds such as Chihuahuas and Yorkshire Terriers generally require less exercise than larger breeds like Golden Retrievers and Labs. This is due in part to their smaller size and resulting lower energy levels.

Age is another important factor to consider when determining how much exercise a dog needs. Puppies and young dogs typically need more exercise than older dogs. This is because they have more energy and are still growing and developing. Older dogs may require less exercise as they age and begin to slow down.

Ultimately, the best way to determine how much exercise your dog needs is to talk to your veterinarian. They can help you assess your dog’s individual needs and make recommendations based on their size, age, and health.

Which breed is more expensive

There are a few factors to consider when trying to determine which dog breed sheds the most hair. The first is the coat type. Dogs with double coats, like German Shepherds, will shed more than those with single coats. This is because the double coat protects the dog from extreme weather conditions and needs to be shed in order to allow the new coat to grow. The second factor is the amount of hair on the dog. Breeds with longer hair, like Golden Retrievers, will shed more than those with shorter hair. This is because the longer hair traps more dirt and debris, which then needs to be shed in order for the dog to stay clean. The third factor is the time of year. Dogs shed more during the spring and summer months as they prepare for the cooler weather of winter. This shedding typically peaks in May or June and then starts to taper off as summer comes to an end.

So, which breed sheds more hair? It really depends on a number of factors, but double-coated breeds with long hair are likely to shed the most.

There are many factors to consider when determining which dog breed has the longest lifespan. Some breeds are predisposed to health problems that can shorten their life span, while others have been bred for specific purposes that may impact their longevity. In general, however, smaller dogs tend to live longer than their larger counterparts.

The Chihuahua is one of the longest-lived breeds, with an average lifespan of 15-20 years. This small dog is relatively healthy, although they are prone to some joint problems as they age. The Yorkshire Terrier is another long-lived breed, averaging 12-15 years. Yorkies are also relatively healthy, but like Chihuahuas, they may suffer from joint problems in their later years.

The Jack Russell Terrier has an average lifespan of 13-16 years, making it one of the longest-lived terrier breeds. Jack Russells are a very active breed, and their high energy level often leads to joint problems later in life. The Toy Poodle has an average lifespan of 12-15 years. Toy Poodles are relatively healthy dogs, but like other small breeds, they may suffer from joint problems as they age.

FAQs about Pictures of Pomskys