A Pomsky is a designer dog breed that is a mix between a Pomeranian and a Siberian Husky. They are small in size but have the temperament of a Husky. Pomskies are very intelligent and easily trained. They make great family pets and are good with children.

Pomskies are a hybrid dog breed that is a cross between a Pomeranian and a Siberian Husky. They are sometimes also referred to as a Pom-Husky. These dogs are relatively new to the world of hybrid breeds, but they have already become quite popular due to their unique appearance and great personalities.

Pomskies are medium sized dogs that typically weigh between 15 and 30 pounds. They have a thick coat of fur that can be either straight or wavy. The most common colors for this breed are black, white, grey, and brown. Pomskies have pointy ears and blue eyes, which is one of their most distinctive features.

These dogs are very active and require a lot of exercise. They are also very intelligent and easily trained. Pomskies make great family pets and do well with children.

Where do pomskies come from 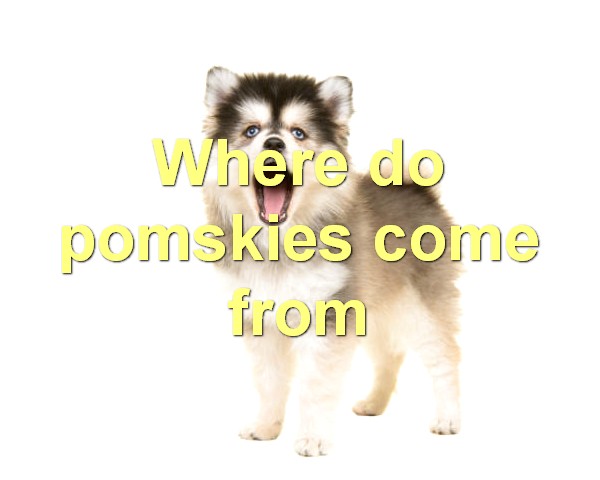 Pomskies are a hybrid dog breed that is created by crossing a Pomeranian with a Siberian Husky. The resulting pups are said to have the best traits of both breeds: the Pomeranian’s small size and thick coat, and the Husky’s friendly personality and love of adventure.

Pomskies are not yet recognized as an official breed by any major kennel club, but that hasn’t stopped them from becoming one of the most popular dogs in recent years. Thanks to their unique looks and outgoing personalities, pomskies have been featured in magazines, TV shows, and even movies.

If you’re thinking about adding a pomsky to your family, there are a few things you should know about this special breed. Read on to learn everything you need to know about pomskies, from their history to their temperament.

The History of Pomskies

The first pomsky was born in 2009, making them a relatively new breed. Though the exact origin of the pomsky is unknown, it’s believed that they were first bred in the United States.

Since they’re such a new breed, there isn’t a lot known about the early history of pomskies. However, we do know that they were specifically bred to be companion animals. Thanks to their small size and loving personalities, pomskies make great dogs for city-dwellers or anyone who doesn’t have a lot of space for a large pet.

One of the things that makes pomskies so popular is their unique appearance. As a result of their mixed lineage, pomskies can take on physical characteristics from either parent breed. However, most pomskies tend to inherit the thick double coat of the Husky and the small stature of the Pomeranian.

Pomskies typically weigh between 15 and 30 pounds and stand between 10 and 15 inches tall at the shoulder. They have pointy ears and almond-shaped eyes that are often blue, brown, or hazel in color. Additionally, pomskies can come in any color or combination of colors that you see in either Pomeranians or Siberian Huskies.

Coat care is important for any dog with a thick coat, but it’s especially important for pomskies. Thanks to their dense fur, pomskies are susceptible to matting if their coat isn’t brushed regularly. It’s also important to keep an eye on their nails; if they get too long, it can cause discomfort when walking or running.

What is the difference between a pomeranian and a siberian husky

When it comes to finding the perfect furry friend, there are a lot of factors to consider. Size, energy level, and personality are just a few of the things that come into play when picking out a pup. But what if you can’t decide between a Pomeranian and a Siberian Husky? Never fear, we’re here to help! Here’s a breakdown of the key differences between these two popular breeds:

Are pomskies good with kids

When it comes to finding the perfect family dog, there are a lot of things to consider. You want a dog that is loyal, loving, and above all, good with kids. But with so many different breeds out there, it can be hard to decide which one is right for you. If you’re considering a pomsky, you’re probably wondering – are they good with kids?

The short answer is yes, pomskies are generally good with kids. They are known for being intelligent, affectionate, and patient, all qualities that make them ideal playmates for children. However, as with any dog breed, there are always exceptions to the rule. Some pomskies may be more high-energy and require more exercise than others, which may not be ideal if you have young children in the home.

If you’re thinking of adding a pomsky to your family, the best thing to do is to meet a few different dogs first and see how they interact with your kids. This will give you a better idea of whether or not this breed is right for you.

How much exercise does a pomskie need

As a general rule of thumb, most pomskies will need at least 30 minutes of exercise every day. This can be in the form of walks, runs, or even playing fetch in the backyard. Of course, some pomskies may need more or less exercise depending on their overall health and energy levels. If you’re unsure how much exercise your pom should be getting, talk to your veterinarian for guidance.

What are the grooming needs of a pomskie 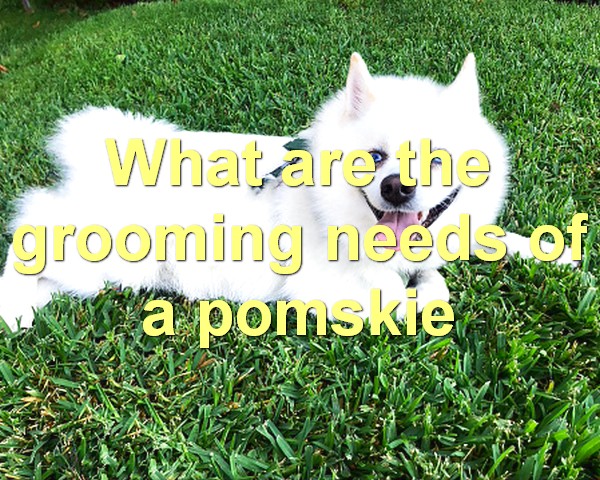 When it comes to grooming a pomskie, there are a few things you need to keep in mind. First and foremost, these dogs have a lot of hair. This means that they will require regular brushing and combing to prevent mats and tangles. Additionally, pomskies will need to be groomed every few weeks to keep their coat looking its best.

While some people may think that shaving a pomskie is the best way to keep them cool during the summer months, this is actually not the case. Shaving a pomskie can actually cause more problems than it solves. First, it can lead to sunburns. Second, it can cause the hair to grow back in unevenly, which can be quite uncomfortable for the dog. Finally, shaved hair does not provide the same level of insulation as unshaved hair, which can make your pomskie more prone to heatstroke.

So, what are the best grooming options for pomskies? First and foremost, invest in a good quality brush and comb. These will help you remove tangles and mats quickly and easily. Additionally, consider investing in a professional grooming kit. These kits usually come with everything you need to keep your pomskie looking his or her best, including scissors, combs, brushes, and even shampoo and conditioner.

By following these simple grooming tips, you can keep your pomskie looking his or her best all year long!

What health problems do pomskies tend to have

Pomskies are a relatively new dog breed, and as such, there is not a lot of information available about their health. However, there are some health problems that pomskies tend to have that owners should be aware of.

One of the most common health problems in pomskies is hip dysplasia. This is a condition that affects the hip joint and can cause pain and lameness. It is important to have your pomsky checked by a veterinarian if you suspect they may have hip dysplasia.

Another common health problem in pomskies is allergies. Many pomskies are allergic to grass, pollen, and other environmental allergens. If your pomsky is displaying signs of allergies, such as excessive scratching, itchy skin, or runny eyes, you should take them to the vet for treatment.

Pomskies are also susceptible to a number of eye problems, such as glaucoma and cataracts. If you notice any changes in your pomsky’s vision, or if they seem to be having trouble seeing, you should take them to the vet for an examination.

Finally, pomskies are also at risk for obesity. Because they are small dogs, they often don’t get enough exercise and can easily become overweight. If your pomsky is carrying around extra weight, it is important to work with your veterinarian on a weight loss plan.

By being aware of the health problems that pomskies tend to have, you can help ensure that your pomsky stays healthy and happy for many years to come.

How long do pomskies live

Pomskies are a hybrid dog breed that is a cross between a Pomeranian and a Siberian Husky. They are relatively new to the canine world, with the first litter being born in the early 2000s.

Pomskies are known for their striking blue eyes, which is one of the reasons why they have become so popular in recent years. They are also very intelligent and active dogs, which makes them great companions for families with children.

So, if you’re thinking about getting a pomsky, you can expect them to be a part of your family for many years to come!

How much does a pomskie cost

A pomskie is a hybrid dog breed that is created by breeding a Pomeranian with a Siberian Husky. These dogs are known for their small size, intelligence, and loyalty. They make great companion animals and are excellent with children. Pomskies typically range in price from $1,000 to $3,000.

Is a pomskie the right dog for me

FAQs about Picture of Pomsky